Why I Love Manchester: Words From A Newbie

Manchester’s not the type of city to charm you straight away. The first few times I came here to my family, the city was just the backdrop.  London was always on my mind—that (much) bigger older brother that, being so much bigger and crazier than Manchester, always tended to overshadow the second city for me. Plus, there’s that weather. Especially in the winter, Manchester gets aggressively grey, the fog hugging close and the rains coming hard. London seems positively Mediterranean after days like that.

That all changed when I started to explore it myself with Supercity. As we started preparing for the launch of Church Street, I got sent up there a few times. My mission? Understand the city. Solo travelling’s a completely different story: no longer a backdrop, Manchester became the star show. It made me love Manchester. 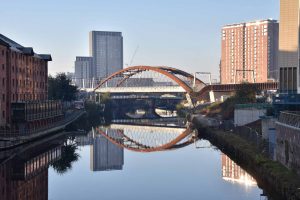 On my own, I was hit with a number of obvious things Manchester does very well. It’s a much more laid back approach than London—you don’t see people knocking pedestrians out of the way to catch their bus/tube/tram. The bars on Canal Street and the Northern Quarter were always buzzing. That rain? It never seemed to stop people. I guess that’s the plus about it drizzling all the time.

Probably my favourite tourist aspect was the walkability: Manchester’s so dense that you can stroll in any direction and find something interesting. The whole central city takes about twenty minutes to traverse. Just try doing that in London—you’ll be lucky if you make it to the next tube stop. It meant I could wander—my favourite tourist activity—without worrying, popping into the great free museums (the Science and Industry being the best) between all that street art hunting and picture-taking.

That’s what made me start to like Manchester. To love it, I had to start scratching past that surface. 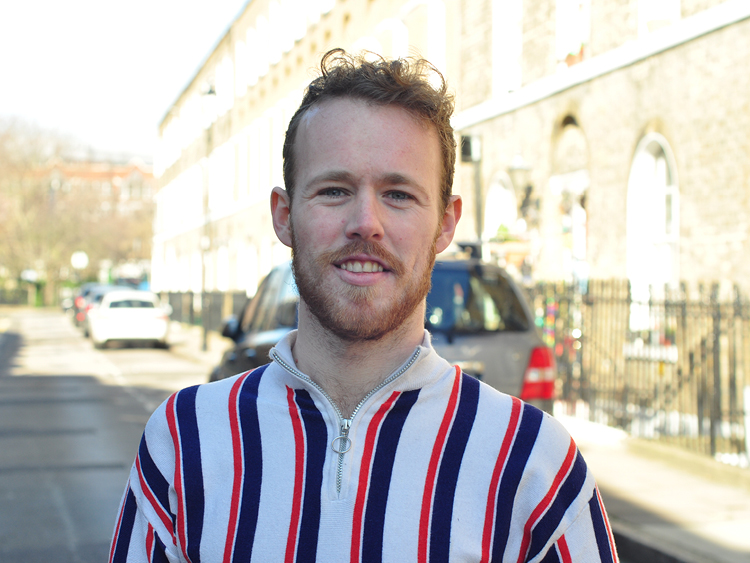 Based right in middle of the Northern Quarter, Church Street was the perfect home base to do that. You’re hit with the district’s coolness right away. It’s a coolness defined by a wide range of great pubs and clubs (Cane & Grain was my favourite), espresso bars in shoebox side shops or warehouse roasteries, and amazing restaurants. It’s true, you could eat and drink your way through this dense network of side streets and die happy.

But below those surface traits, what really struck me was the attitude. People in the area never felt the need to show off, the way East London districts (cough, Shoreditch) do. There was a friendly openness to the people I met, relaxed and good natured despite all the rain, with people eager to give me the low down on best places to go and see. They were proud of their area, but weren’t about to brag about it. It just took a little digging for me to understand that.

It’s the same case with the street art I found. Manchester has some of the most striking pieces of street art I’ve ever come across. Many of the most powerful were commissioned by Cities of Hope, an amazing initiative that every city should have, where the artists hired tackle a different social issue. From homelessness, to commentary on the refugee crisis, to feminism and gay rights, these were works rooted in social criticism and activism. Yes Manchester has two art galleries, but these pieces, to me, are the city’s real art gallery. They might not last forever, but they’re challenging, beautiful, and accessible to everyone—all the things art should be. 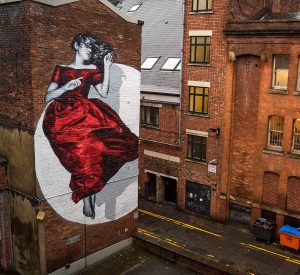 Indeed, it’s the activist undertones that really made me love the city.

Manchester’s had a complicated history, to say the least. Its industrial beginnings are still moulded into the urban landscape. From the gorgeous Victorian terracotta and redbrick buildings (especially the City Hall) to the intimidating large factories in the Ancoats district. Its nickname, “Cottonopolis,” came from it being the world’s centre of the cotton trade for almost a century.

But underneath that history, exploitation was rife. The industrial revolution was built on the backs of the workers who came to Manchester, often after being evicted from the farmlands their families had lived on for generations. In the factories, days could be upwards of 16 hours, with extremely low wages and dangerous working conditions. Not to mention, much of the cotton the city became rich off of was picked by slaves in the colonies. 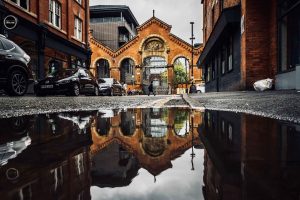 Rather than try and ignore this history, though, Manchester locals are proud of their responses. From Peterloo, to Suffragette struggles, to more recent fights for equality especially gay rights, it’s a city that’s played such a crucial role in shaping the rights enjoyed in Britain today. It’s not been an easy journey, but the People’s History Museum (the only museum of its kind in the UK), charts that progress. Meanwhile, you can take walks through the city (as I’ve set out to do all this week) and see how that struggle was played out across the city itself. Go and find the statue of Emmeline Pankhurst, and you’ll see the truth in that, too.

This is what makes Manchester such a special city. For all that edginess and hipness, it’s the underlying push for social justice that makes this more than just a passing trend. If you don’t believe me, take another walk through the Northern Quarter and see that push made visual.

There’s so much to do, see, and learn. That’s why it’s so exciting to have Supercity’s newest aparthotel placed right there in the middle of the action. With this complex, fascinating city, I’m only getting started.

Thanks for reading! If you liked my take on Cottonopolis, make sure you check out my walking tours I’ve crafted, to help you fall in love with the city the way I did.